The review feedback will be sent to the email you provided during the application process. Once the API access application has been approved, you can proceed to the below step for App Creation In Twitter Developer Account.

4. Generate Consumer Key, Consumer Secret, and access tokens. Make sure to save these keys somewhere save as you will need to configure them in the CCM (Channel-Manager variable.env file) 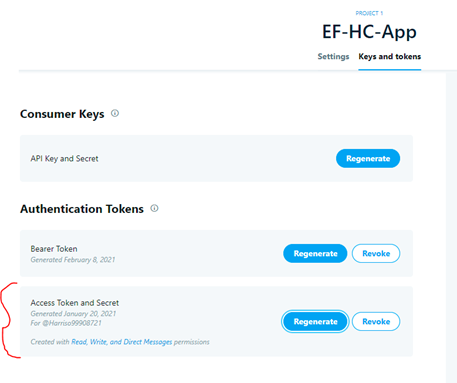 5. After you've created the APP and Generated the Keys & Tokens. Navigate to the following tab “Settings” and change the App permissions to Read+Write+Direct Messages. To do this, click on “Edit”. 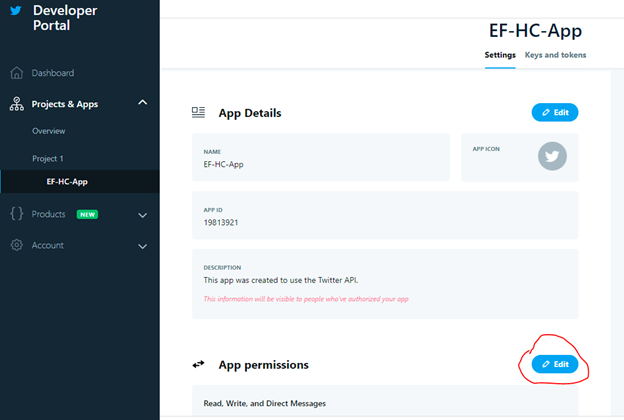 6. Copy The Keys & Access Tokens you generated in Step 3 into a secure location for future reference.

7. Create a Lab Environment where you will access your app, Navigate as follows 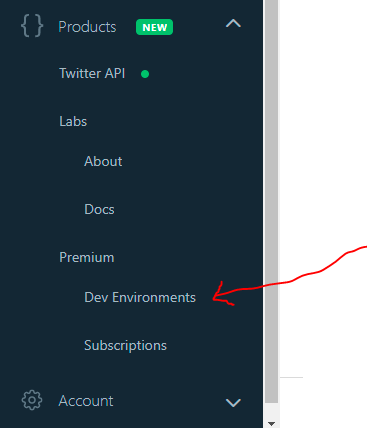 Keep Note of this environment name, as you will need it when registering CCM’s Twitter webhook with Twitter.

Since Twitter is cloud-based, to integrate it with CCM, the Twitter endpoint inside the CCM MUST be accessible publicly and MUST also be hosted in a secure host with a valid SSL certificate.

The Twitter endpoint in CCM will be as follows: https://FQDN/ccm/webhook/twitter

Before integrating this endpoint to Twitter for us to receive Live Twitter Direct Messaging Events, we need to configure the Keys and Access Tokens we generated above in the App creation Section. Copy and Paste Keys/Access token in ccm environment_variable.env file as following;

However, Twitter doesn’t accept the absolute URL as it is, so we need to Encode the URL. You can use any encoding tool available or you can use Postman to encode this URL.

To encode the URL using the Postman Tool. Paste the URL on the address bar in Postman, and then select the “encode” option by clicking the 3 dots shown in the screenshot below.

The encoded URL will look similar to this :  https%3A%2F%2FFQDN%2Fccm%2Fwebhook%2Ftwitter

To register a webhook, you can use Insomnia too, you can find it here. Once you install then you may proceed as follows;

Replace “research” with the Development Environment Label that you created on the Twitter developer platform. 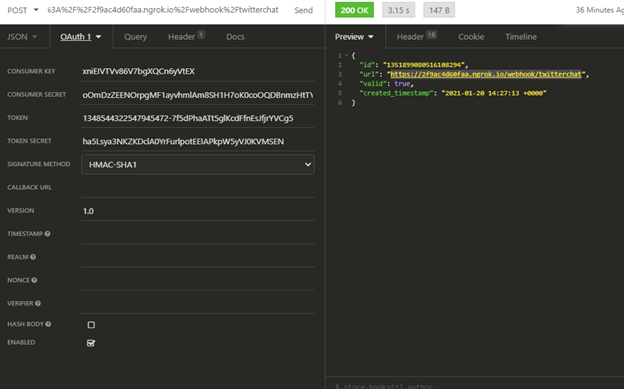 Leave the rest of the field in default values. 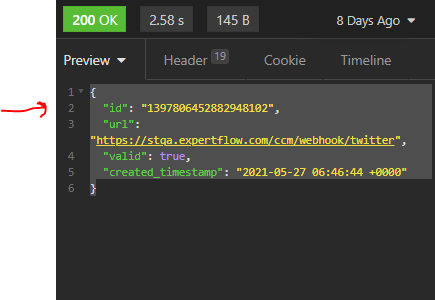 B. Subscribing the webhook events

This part will activate the webhook to receive the messaging events from Twitter.

Replace “research” with the Development Environment Label that you created on the Twitter developer platform. 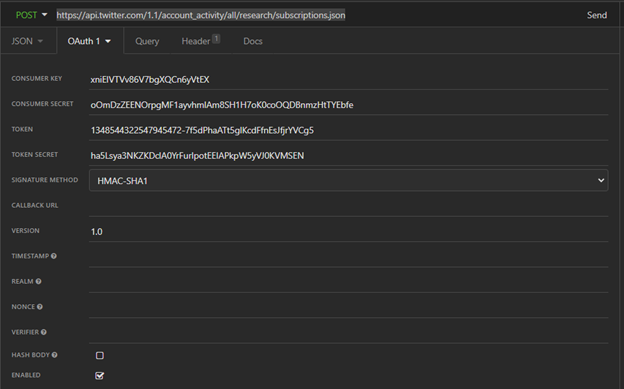 Leave the rest of the field in the default value

From time to time you might want to change the webhook URL which Twitter calls to pass messaging events. One more likely reason to change this URL is when the HC FQDN has changed to a new FQDN.. In this case, the FQDN which forms the webhook URL has changed and twitter will expect you to reflect this change in your webhook configurations as well.

So, how do we change the Webhook?

Changing the Webhook URL is a simple process which involves only 4 steps. Let's dive into these steps:

A. Extract the webhook id from Twitter for the current webhook that you want to change.

– - Replace the environment label {research} in the URL https://api.twitter.com/1.1/account_activity/all/research/webhooks.json

Copy the Id returned in the response

Success: If it was successful, it will give you 204 - No Content Status, as shown in screenshot above

D. Subscribe to receive Webhook events from the new Webhook

Follow the procedure described in Step: Subscribing the webhook events above